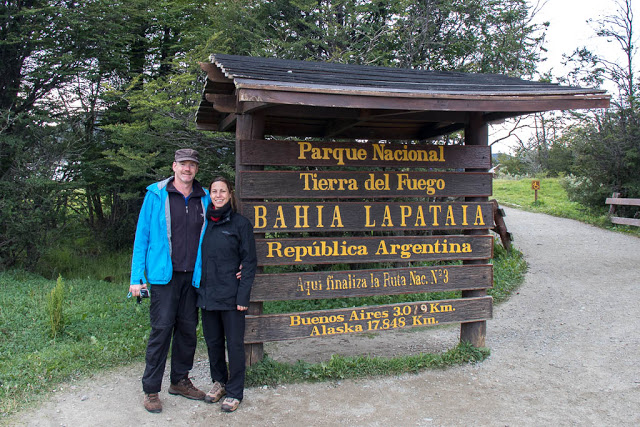 Breakfast at the hotel is a bit sparse, but seeing as we managed to turn down the heat in our room I’m happy. Internet speed is still woeful. First world problems. I know. The air fresher that attacks in the hallways is also a mild irritant.
Happily we were out and about today on a tour of Tierra del Fuego with Canal Fun tours, organised by co-traveler, animal rescuer and fellow bird lover, Fiona.

Our guide, Valentine, and canoe specialist Frederico, were very entertaining, informative, funny and accommodating. Couldn’t ask for a better introduction to Patagonia. Some of what I report here may be false however as Valentine tried to convince us that horse poo came from the Antarctic Mosquito (or something to that effect). Blame him for anything here that isn’t completely factual. 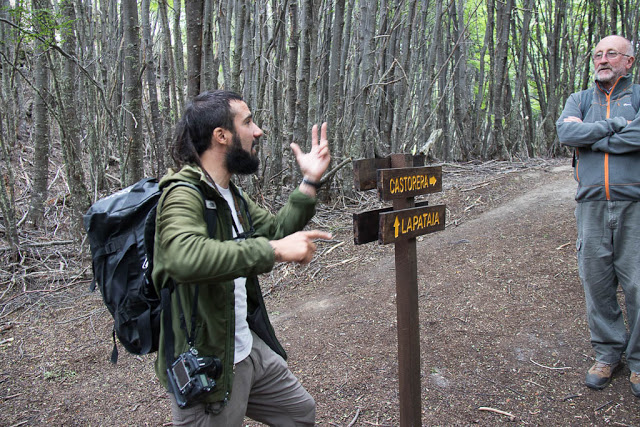 I can say with certainty that today was the perfect weather for a canoe / raft ride and a hike through the serene national park. It was about 17 degrees, with a breeze and a few sprinkles of rain. With layers that went on and off like a strobe light we were very comfortable. 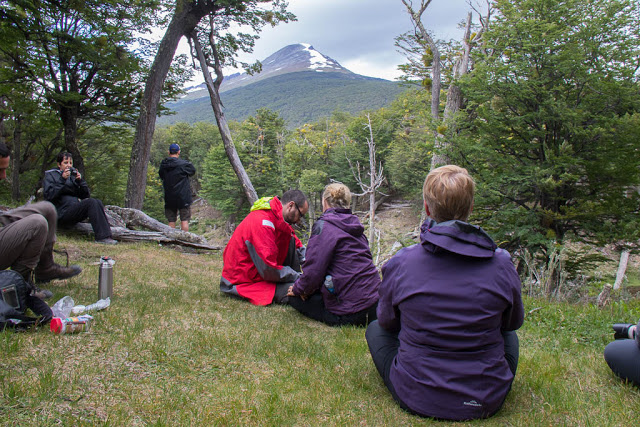 While others were using the ‘organised toilet’, Kingsley, Nicole and I were lucky enough to see a Condor circling overhead. I have a few photos which are really just black specs so verifying them as a condor might be tricky, but Valentine said it was (see disclaimer above).

Other wildlife spotted included two types of falcon, the ash headed and the Upland ducks (both with chicks), an endemic red fox, miscellaneous small song/bush birds and black necked swans (sort of a like a top deck style swan). Dave saw a beaver, but our boat was too busy paddling around in 360 degree circles to see that one. We all looked rather special in our waterproof pants though. 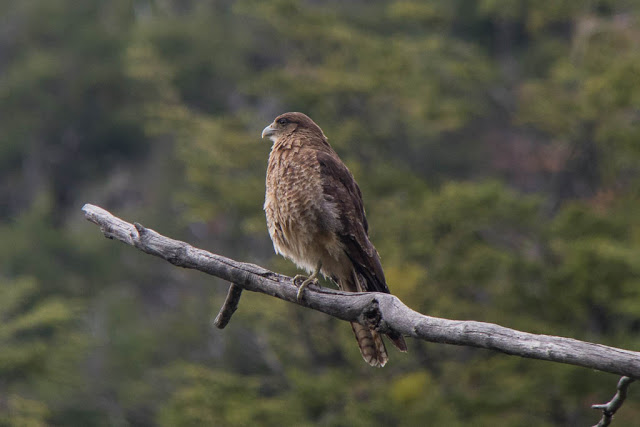 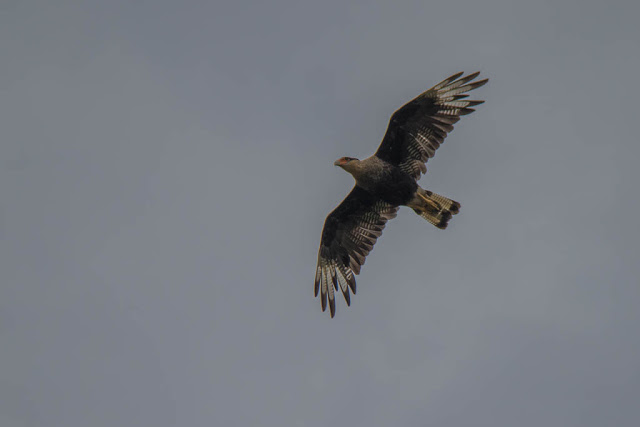 We learnt a little bit about the history of Ushuaia, which I hope to consolidate with a trip to the maritime museum tomorrow. You all know how I love a good maritime museum. Like many parts of Australia, Ushuaia has some of its relatively recent roots as a prison colony.  Keeping prisoners geographically separate to the general population always helps to hide all the atrocities you might like to inflict on them after all (seems to work for equally well where people have committed no crimes and it is merely convenient to shut them away for no good reason but I’ll resist the urge to get too political here and now). Islands are especially popular for this.

The Europeans also manged to wipe out the local indigenous, Yamana,  population by introducing diseases. Again, a sadly familiar story to back home.

We did learn that Patagonia stems from the term big foot, related to the indigenous population who were not only tall, with big feet, but who wrapped them in skins as shoes, making their footprints seem even larger. And that aia translates to bay from the Yamana language to English.

The first part of our tour involved a paddle in an inflatable boat.  Call it a raft or canoe as it suits you best. The very best of the ‘’rapids’ we went over meant that we didn’t have to paddle to move, so no risk of toppling over as long as no one stood up. No one did. We could have benefited form a bit more paddling and steering practice but we got where we needed to be in the time allotted, without falling in, and allowing appropriate time for photographs along the way so well done us I say. 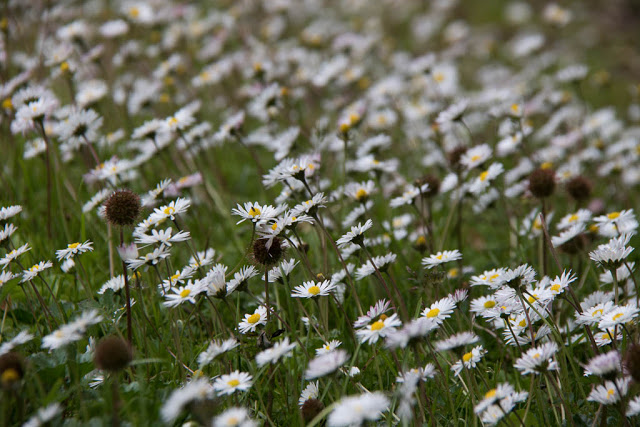 We have a  number of vegetarians on our trip, and this was specified when the tour was booked. One way or another that message didn’t get through to catering so there was a bit of rearrangement at lunch.  I think that the staff ended up eating the chicken dinner while our vege travelers ate their lunch.  I can’t be certain.

We got to see some of the damage I had read about  by beavers introduced to south america form north america. In the wisdom that has been repeated worldwide some enterprising soul thought that setting up a fur trade (yes, not a good plan even if it had worked out) in south america was a good idea. So they brought 25 mating pairs of beaver from Canada and deposited them in South America.
The chronicles of Narnia and a trip to Canada as a child leaves me predisposed to like beavers, but everything has its place, and the beaver does not belong here.

Not only is the climate so different to where they come from that the fur they produced was worthless, but there are no natural predators so the beavers set to work terraforming the environment, cutting down some trees and drowning others with their dams. Clever critters, in totally the wrong place. There is a now a program in place to eradicate them. Sucks to be a beaver in the wrong place, but that applies equally to rabbits, cane toads and the long, long list of our other F&*^ ups.

And less that 20 years ago, when people really should have known better, salmon were introduced to the rivers and now have to be eliminated as they out compete everything here.  For a very clever species we are dumb as rocks.

On our hike we saw a couple of different orchids.  I know Jon would have stopped there and we would have had to send Pepe out looking for him. The vegetation is a mixture of forest and meadow land. The tree line finishes at roughly 700m (that’s from memory so don’t go basing a thesis on it). We were well, well under that, but looking up at mountains on both the Chile and Argentinian side. Because of the climate everything takes much longer to break down. 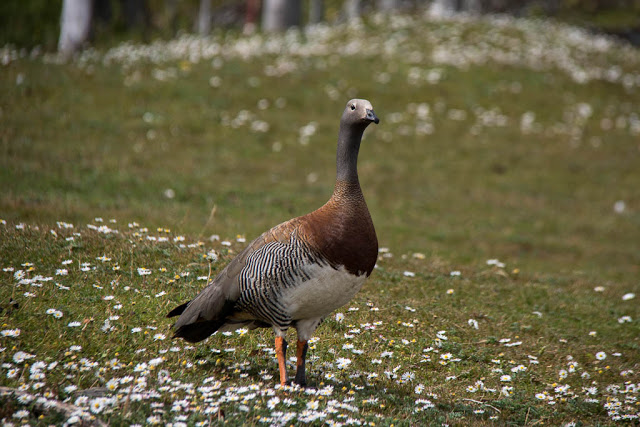 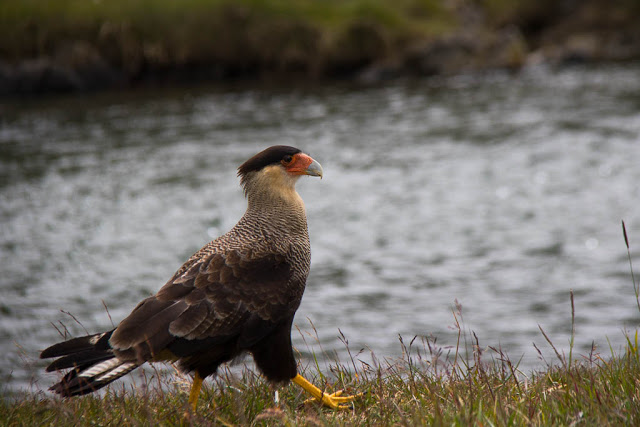 It was lovely to get to know some of the people were will be traveling with over the next 11 days or so. There is the off chance some of them will be reading this, but I can genuinely say they are a great bunch of folk and I’ll looking forward to getting to know them better. Given my normal aversion to people that’s saying a lot.

I’m not much of a landscape photographer.  Landscape really is about planning to be at the right spot, at the right time of day, at the right time of year, while scratching your right ear with a four leaf lover, well you get the idea. My challenge today was remembering to switch back from landscape setting when I saw something interesting (ie birds). There were a few occasions that were a massive fail, but at least I learnt that today and hopefully will manage not to repeat this when I’m on the next continent. 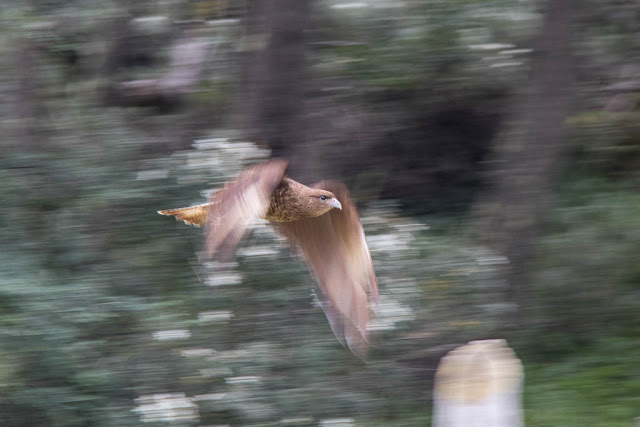 And tomorrow is the day we set off. That means no more posts will be published until we’re back here. I will endeavor to write them up every day though.

Ushuaia is the world’s southernmost city.

Argentina legalised same sex marriage in 2010 (come on Australia, get out of the dark ages already) and that the first Latin American marriage was conducted here in Ushuaia.

Tierre del Fuego National Park is approx 68,000 hectares in size and home to roughly 50 horses as well as a range of endemic wildlife and introduced pests.

The average temperature year round in 5 degrees C. It has an average winter temperature of 0 degrees, moderated by the proximity to the ocean. 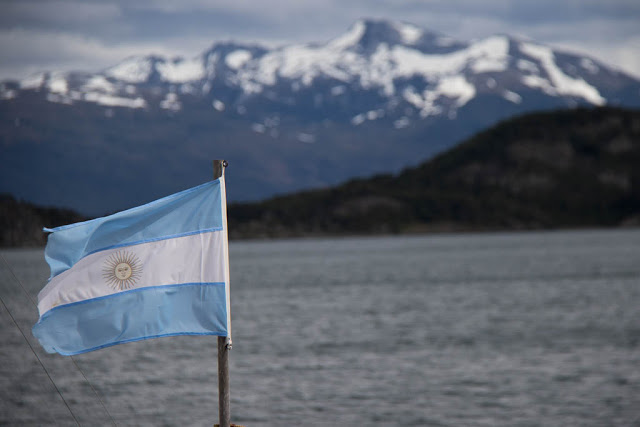 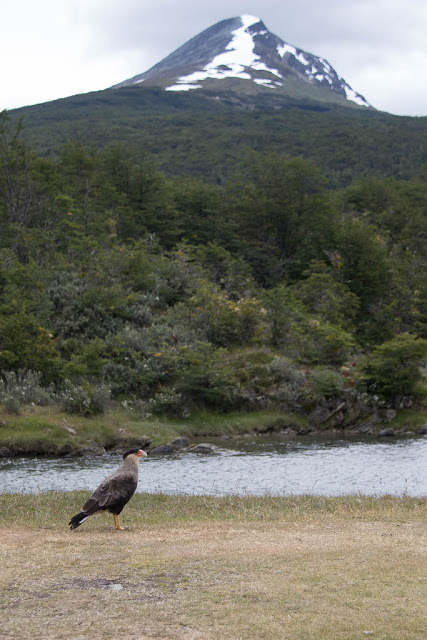