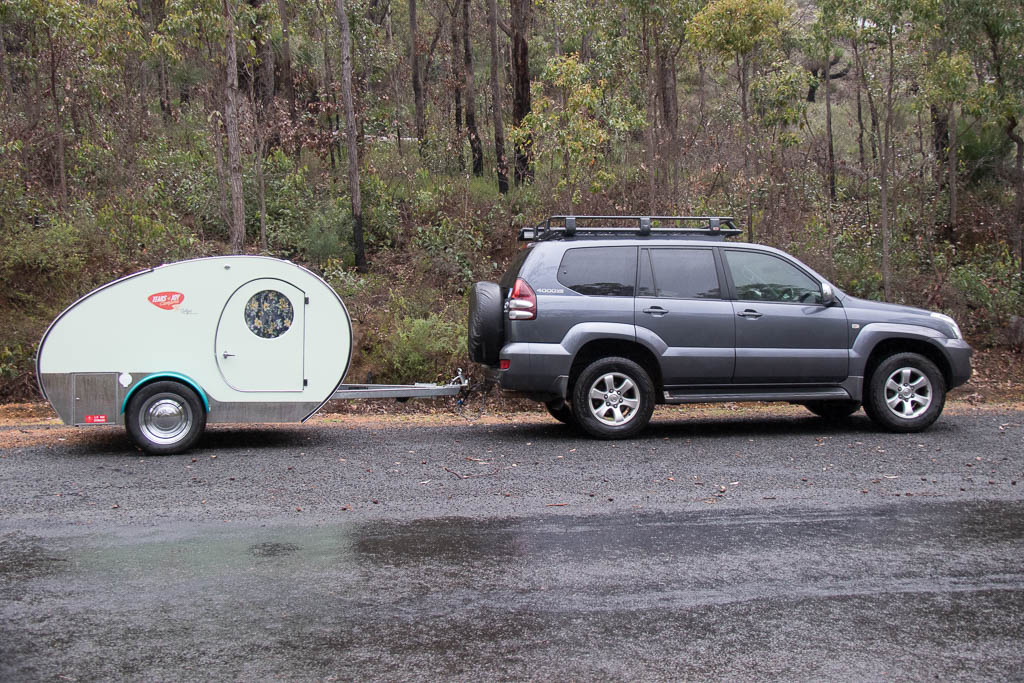 Our family did a bit of camping when I was young, but it has been a while since I went bush. We fancied a little mini break and K had the bright idea of trying out a teardrop camper.

And a fine idea that was.

Glamping is all the rage at the moment and the Gidget fits into that category nicely. We hired from Tears of Joy camper rentals in Kenwick.

We don’t currently have a tow ball on the back of the Mazda, so borrowed by Brother in Law’s Prado to do the towing.  K reports that towing the teardrop is much more like towing a trailer than a caravan. Having said that, this was the first time he’d towed anything so I’m not certain how much weight that carries no pun intended).

I can say that as a passenger it didn’t feel any different. The neat size allows you to get into places a traditional caravan wouldn’t go, and the design means that setting up camp is much, much easier than slinging up tents. The cover over the kitchen area in particular makes it an all weather solution. You can pull over at the side of the road, turn on the gas bottle at the side, pop the kettle on the pull out burner and have a cuppa wherever it suited you. We were only two hours from home, so didn’t do that in this case. But you could! 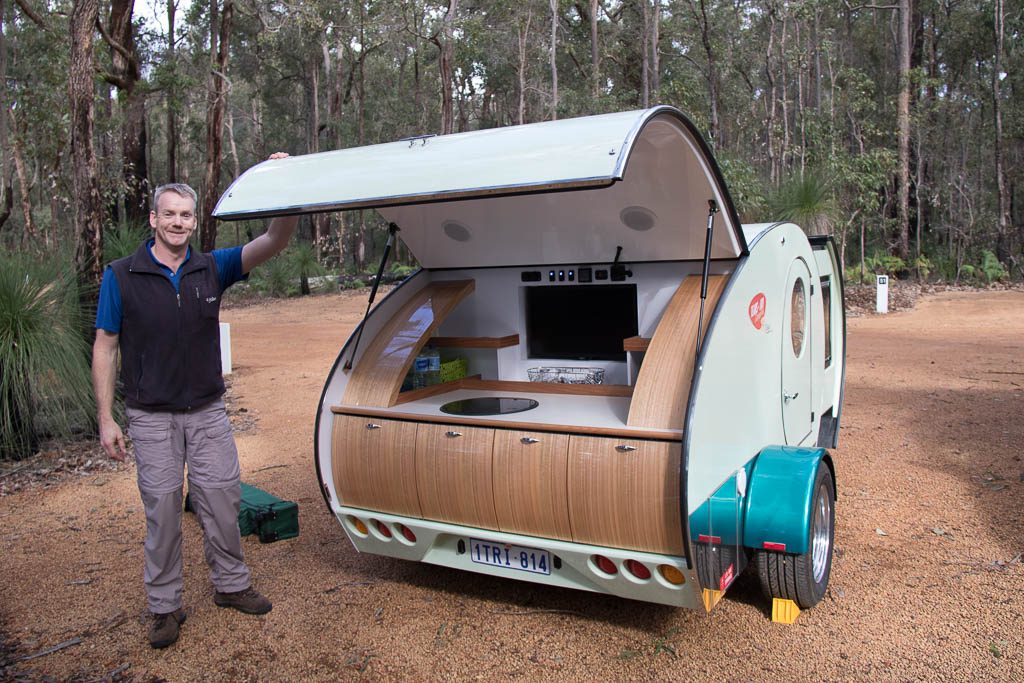 The design is very clever, as well as being quite retro and stylish. You’d be forgiven for thinking it might be form over function, but everything in this little box has a purpose, and was beautifully finished. Well, not everything. The locks took a bit of getting used to. But apart from that.

The Gidget comes fully equipped with everything from a kettle to a TV. Yep. A TV. There are solar panels on the roof to help with power so there are little reading lights in the cabin as well. It has water and waste water tanks, two gas ring burners, a place for an esky, or a fridge.  If we hadn’t been going down south in the middle of winter we might have borrowed the fridge too, but as it was a bag of ice in the cooler did nicely. 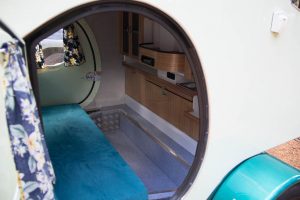 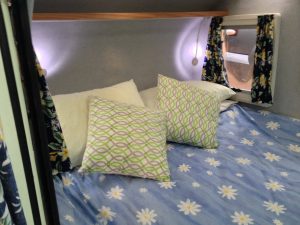 The Gidget has a pull out section that preserves all the storage space in the kitchen, while allowing a queen size bed in the back. I am led to believe that in traditional teardrops the bed extends under the kitchen area, still queen size though. The Gidget also has a skylight. We were woken from a cheeky afternoon nap by a flock or ringneck parrots staring in at us from above.  Apparently they were quite taken with the design as well.

The bed can also be configured to a seating area, and there is a little pull out table top for the laptop for all that blogging you do when you’re on holidays. Or searching for a campsite with a hot shower for a longer trip perhaps.

There is a neat little hatch between the kitchen and cabin, which rotates to allow the service of coffee to the lucky person who didn’t have to get out of bed to make it (Thanks K). In case of rain, and we did have a little bit of that, there is a shade tent under the bed, and chairs as well. 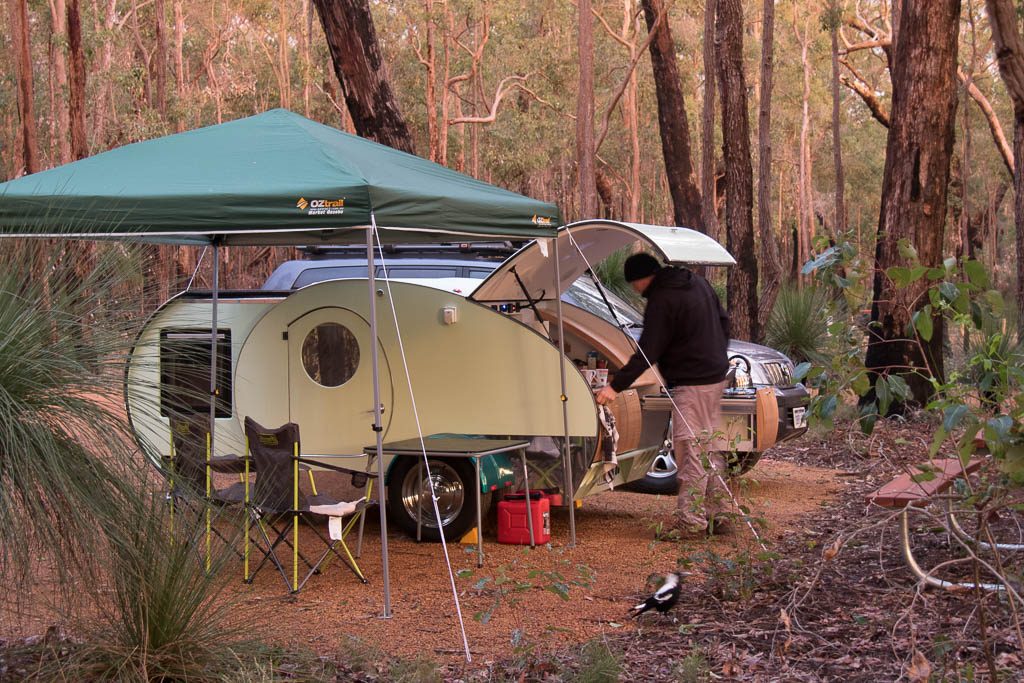 Our destination for our mini getaway was Darnanup / Fergsuon Valley. We were traveling the week after July School holidays so the roads were quiet, as was the newly opened Potters Gorge campsite. In planning the trip K had befriended the lovely Diane of the Wellington Dam kiosk and got the low down on where to stay. There are two main campsite in the area, the newly refurbished Potters Gorge, and the picturesque Honeymoon Pool. We might have been able to get the teardrop into one or two of the spots at Honeymoon Pool, but as you can’t reserve places at either spot we decided on the safe bet at the larger Potters Gorge.

On arrival there was another caravan there. A couple of guys with a tent turned up around dusk. And that was it. There are 50+ campsites so we were all nicely spaced out.  All the facilities are new, so the school holidays hadn’t taken away the new jarrah smell around the toilets and camp kitchens. There are plenty of beautiful trees, and the red tailed cockatoos were our chatty neighbours. Such beautiful birds.

All of the birdlife was pretty friendly. Along with the cockies we had a family of magpies, the flock of ringnecks I mentioned earlier and some red winged fairy wrens at the other end of the park. 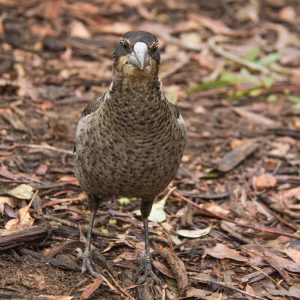 Apart form just chilling out there wasn’t much to do at camp.  In summer you might take a canoe out on the dam, but it was a little chilly for that, and we didn’t bring a canoe. We did a nice trip out to look at the dam from all angles.  Amazing that it was built in 1933. The quarry next to it was a lovely spot too. I thought it would be a nice place for a picnic.  I think K had some kind of music event in mind. They also do abseiling down the quarry wall. Clearly not for me and my issue with heights. 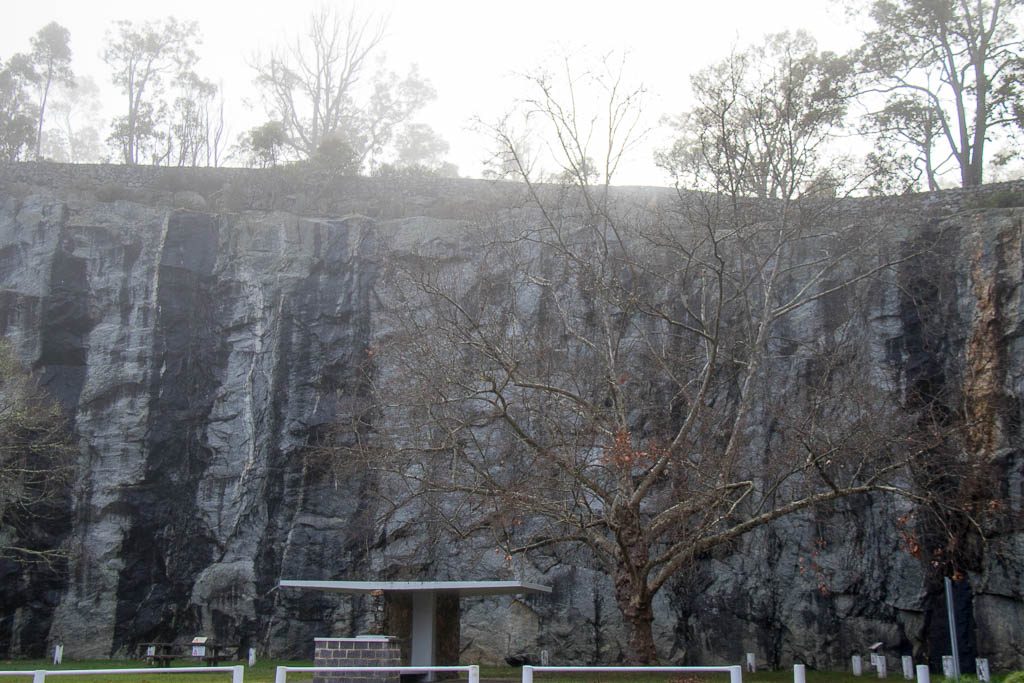 We visited the Honeymoon Pools campsite, and it really was lovely.  All along that way there is running water, granite outcrops and loads of beautiful bush. With some reluctance I was also talked into visiting Gnomesville. I had in my head that it would be some kind of commercial enterprise.  I couldn’t be further from the truth. It started up when a new roundabout was installed so the kiddies could get on and off the school bus more safely. One resident then thought the roundabout would make a good gnome home, and soon word spread far and wide until all the Gnomads made this little bushy corner their new home. 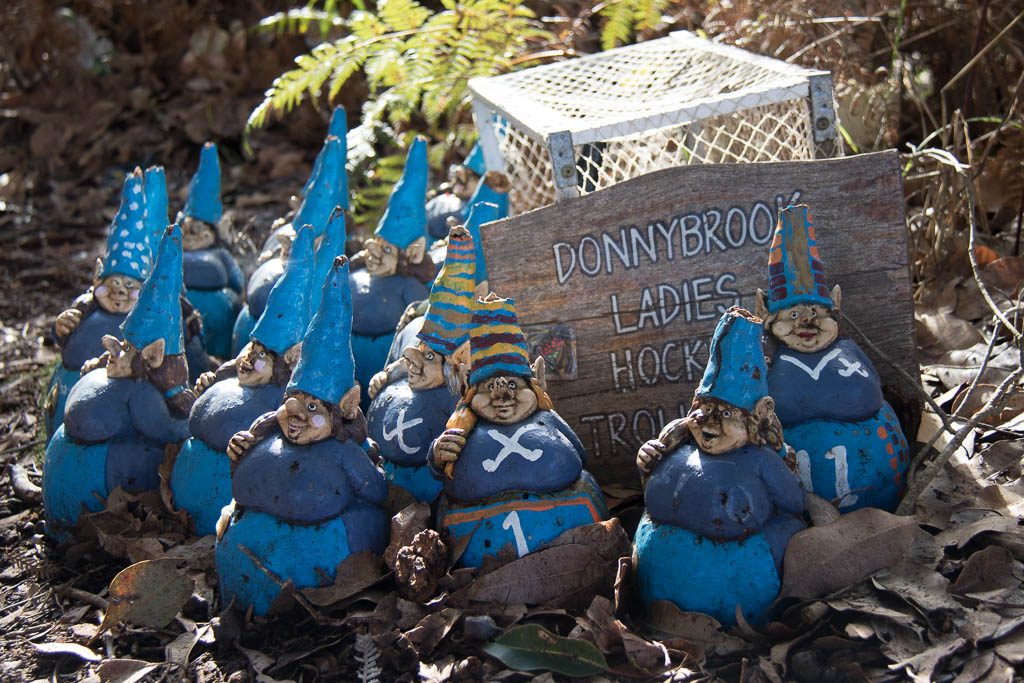 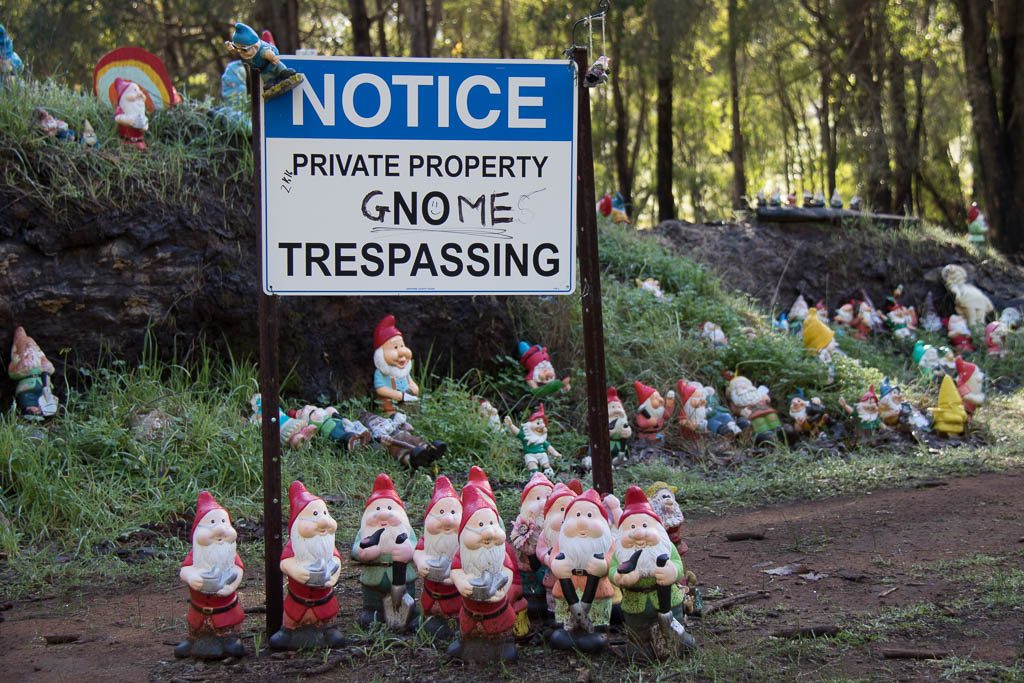 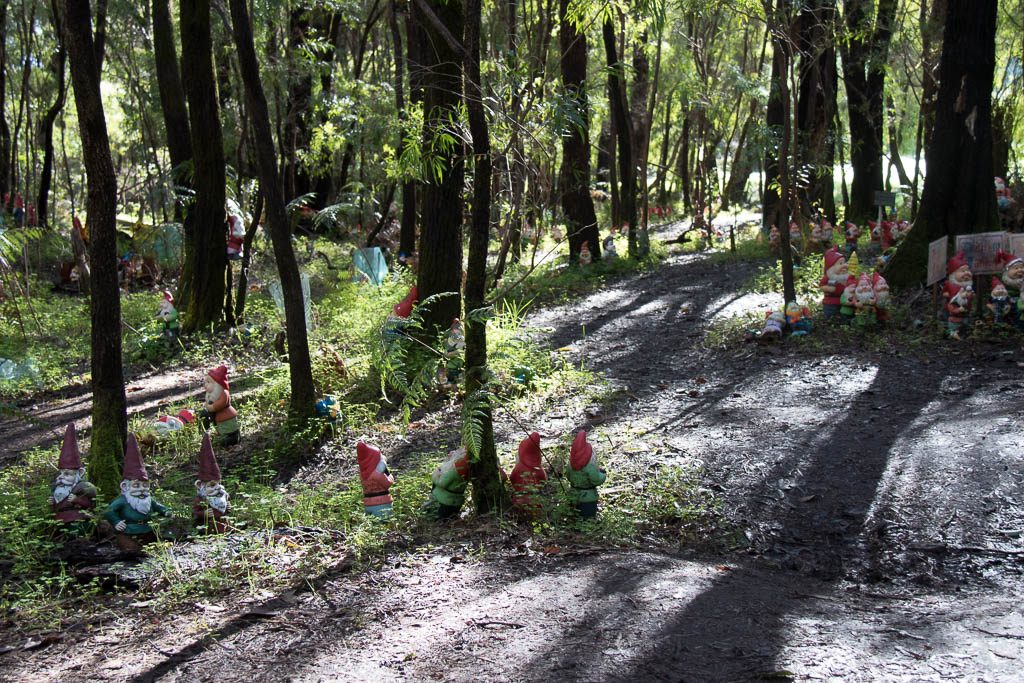 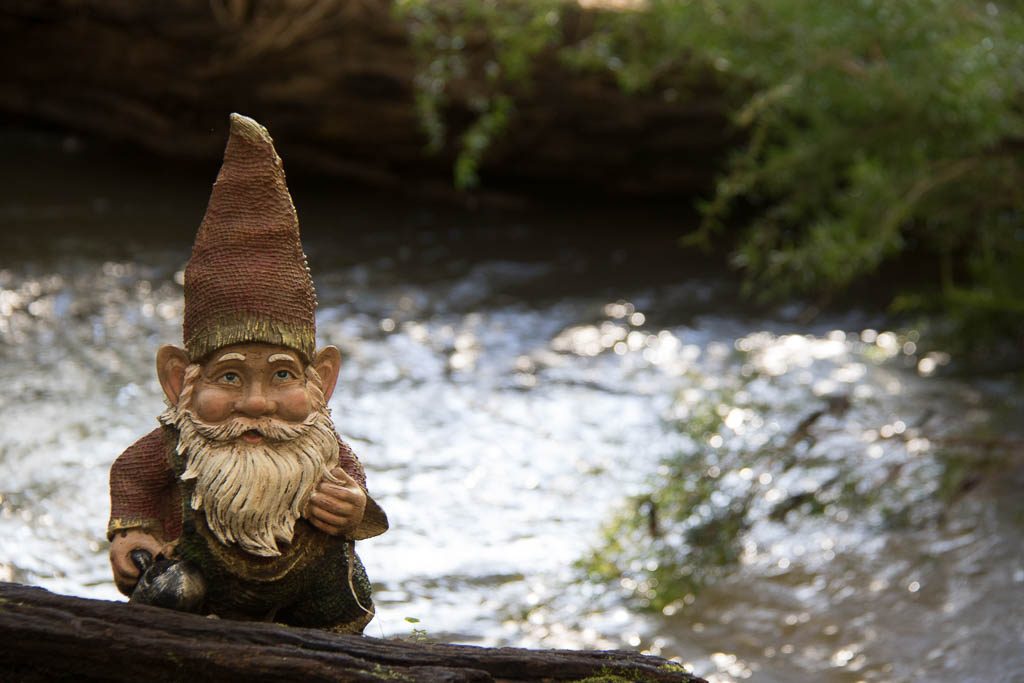 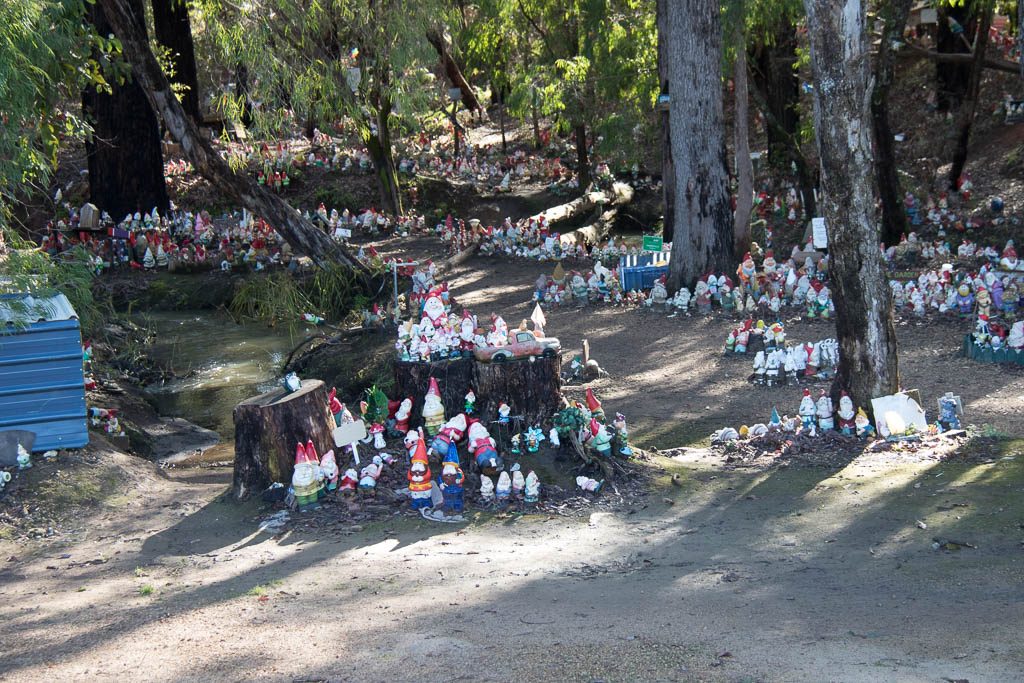 It is surreal. Just when you think you’ve seen it all, you turn a new corner and there are more gnomes. They come is all shaped and sixes, often with little signs showing from whence they came.  Many are international gnomes, others local. Some come as groups from sporting, social or charitable groups. Others are clearly memorials for lost loved ones.

There was a pile of former gnomes in pieces.  Apparently when the river water gets up there can be some gnome fatalities as they get swept away. The red capped robins flitting abut fitted right in with the red capped gnomes.

It was one of those places where you ‘just have to be there’. If you’re passing by make sure to stop in.

If you happen to be in the Ferguson valley on a Monday, Tuesday or Wednesday it is one of the only things open.

We did manage to get into a busy St Aiden’s for lunch, and visited Willow Bridge for some wine tasting, but most other places, including my favourite Ferguson Falls, were closed. Which, of course, is just a good reason to head back there again soon, this time on a Friday, Saturday or Sunday.