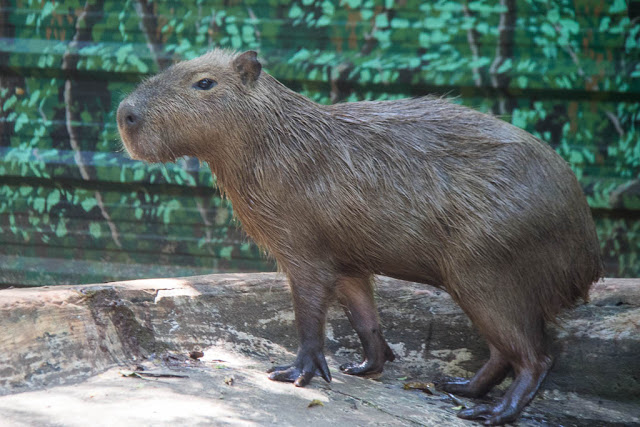 Day 8 – Iguazu Argentina to Iguassu Brasil and back again

Here is the picture of the giant, ponderous rat I promised you. Capibara by name and super cute by nature. On Day 8 we spent the day being driven around by the lovely Sergei so we could see the Brazilian side of the Iguazu Falls.. He made the trip quick, simple and fun.

He picked us up at the hotel at 7:30 as requested, which turned out to be ideal timing both for setting out and for our later return as all the traffic was going the other way.
Our itinerary for the day was the Brazilian side of the falls, a helicopter ride over said falls for Kingsley in a Bell Jet Ranger (the same model of helicopter that we had sitting in our driveway for a month or so), the bird park and finally a tour of Guira Ora, the wildlife rescue centre back here in Argentina.
This final destination was the most interesting. Our guide spoke both English and Spanish so commentated the walk in both. We we the only English speakers but felt included the whole way round.
It was fascinating to hear that they get animals and birds in not only from road accidents and general misadventure, but also surrendered animals from people who have taken native animals as pets but have discovered that the little things that was cute as a wee thing is now trying to savage them (now illegal here) , from seizure or confiscation by authorities and as a result of injury from trapping or hunting.

These included some native cats, porcupines, toucans with missing wings or legs, monkeys and the biggest otter I have ever seen in my life.

The birds and animals that form the tour for visitors are those that have no prospect of re-release. Those that are blind, have had feet or wings amputated or have been kept in captivity as pets and would not know how to fend for themselves in the wild. The animals that will be rehabilitated are kept away from the public which is as it should be.
We learnt that the largest of the toucans is like a pelican in that it can be car versus, devouring the chicks of other birds. That sweet and open demeanor is just a cover. Beware birds bearing large beaks. In contrast I felt a bit iffy about the bird park in Brasil. Most of the enclosures were relatively roomy and full of stimulation, but I didn’t get the feeling that it was about conservation as much as tourism. The butterfly house was lovely, but they don’t stay still any longer the than in the jungle.
The border crossing, as I mentioned yesterday (well of day 7 seeing as I’ve posting this very late), was the first I’d done on land. As I’m sure all of you already know that me at first going through Argentinian immigration (very slick) and then Brazilian ( looks like it was slick once but now not so much). Sergei took care of it all for us. At the Argentinian border then is a fast lane for tourists and you pass your passport over form the car. We had to slide open the door so the guy in the booth could see us, but it all took about 3 minutes and we were on our way.
On the Brazilian side Sergei just took or passports into a little office then about 15 minutes returned with them stamped and processed. If you recall we had our visas sorted in advance. The return journey worked the same way, except that we needed to show our reciprocity tax receipts at both.
The rain gear came in handy again as we did the other side of Garanta del Diablo. The other side of the falls is more panoramic. You arrive at the visitor centre then jump on a bus that takes you out to where the water is. This is one we wouldn’t have wanted to walk because it is too far, not all that interesting and there is no pathway. The bus is a double decker so you can look at the rain forest from up high. E most interesting thing to watch on the bus was the very sweet little girl and her loving dad on the the seat in front of us. She was loving the ride and the most beautiful smile. It was a reminder to enjoy the simple things like the feeling of wind on your finger tips.

I may expand on this if I have time, but we check out of the hotel with the very slow internet very soon and I want to get this done, so here are some pictures of the beautiful creatures who live in this part of the world, and one of Kingsley. We did see wild toucans while at the hotel and they look pretty silly when flying.