Day 5 was the day I was dreading. It was another travel day, and we were at the mercy of many things over which we had no control. Overall it all went smoothly.
We had a transport booked from the apartment to the international airport in Santiago which arrived on time and whisked through the still sleeping city quickly and quietly. At the airport we attempted to use the self check-in, which worked for me but not Kingsley so I was furnished with boarding passes for the flight to Buenos Aires and the domestic flight from Buenos Aires to Iguassu Falls. Kingsley had a neatly printed slip of paper saying something had gone wrong.
Staff at the bag drop desk were able to assist however and we soon both had boarding passes for the first flight.
The flight from Santiago to Buenos Aires took us about an hour and a half and gave us a spectacular view of the Andes as we flew over. 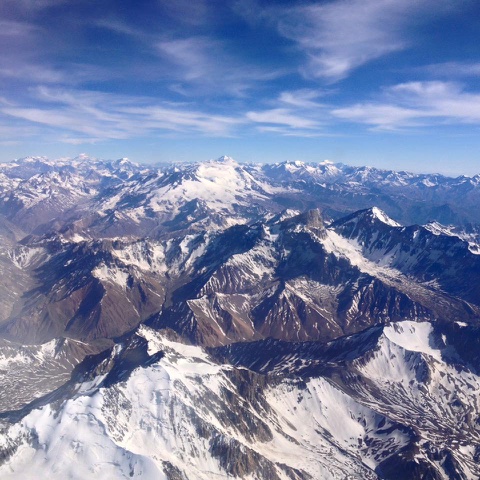 I have a What The? For the city of Buenos Aires. Why build the international and domestic airports so far apart (45 km) Our connecting flight was domestic, so we needed to disembark, clear immigration, collect our bags, get through customs and trek across town in time to check-in, drop our bags and present for boarding on the new flight. We touched down in BA at 10:50 am, as scheduled. Originally our connecting flight was due to leave at 14:20 pm, but LAN had kindly pushed that back by an hour, giving us more time for which I was thankful.
*i have since learned that the Jorge Newberry airport is an international airport so probably my own fault. Even so…
We managed to clear customers etc in 40 minutes, and the airport transport service I had booked form home was waiting for us at arrivals with my name printed clearly on a board. I saw lots of other people waiting with names scratched on a piece of paper so I felt quite special. Our driver was also in a suit! He didn’t speak any English though, and we have already established that my one day of Spanish in duo lingo doesn’t get us very far. He knew where we were going though so we followed him to his car.
The car was a Renault. Kingsley’s suitcase fit in the boot. Just. Mine did not. It got wedged into the passenger seat, which would have been fit had the car been an automatic. It wasn’t and our poor driver kept prodding at it to make room to change gears.
The drive across town to the domestic airport took just under an hour. We were travelling between 11:30 and 12:30 and there was very little traffic. Being in a strange place the traffic is always the killer. On arriving a possible reason for the distance between international and domestic terminals presented itself. The national Argentian carrier does have international flights arriving at the domestic terminal.  This would clearly give tham an advantage as if we’d flown AA we wouldn’t have had to make the dash across town. I could be wrong. I don’t think I am. I also which I’d done my research as I could have booked our flight from Santiago with AA. Live and learn.
We had arrived in plenty of time for our flight, in plenty of time if the time had been the original easier time too. It was a big relief. A friendly LAN staff member helped Kingsley check-in and we were ready I for our next challenge, local currency.
We had come armed with USD to exchange in country, but had heard that the rates oat the airport are unfavourable. We were going to need cash for our transfer form the airport to hotel in Iguassu and the entry fee to the park (260 ARS per person). And we were ready for a drink and a bite to eat.
So I thought an ATM on this occasion would do the trick. I was aware that the banks have a daily withdrawal limit or either 1000 or 2000 pesos. In our case 1000 pesos (approx $100 AUD) was going to be very tight and leave us nothing for tips or spending money on arrival in the park. I couldn’t find an ATM that would give me any more than 1000 pesos.
I should have listened to Kingsley and stopped to work out how much we’d need before heading to the departure lounge area. Then we could have bitten the proverbial bullet and changed some USD at the exchange place there. I figured there would be one at Iguassu airport. I was wrong.
There was another ATM that allowed me to withdraw another 1000 pesos though. I will be looking at two lots of withdrawal charges when I get home so my $200 AUD will cost me $216 plus whatever pain is associated with exchange rates that I haven’t anticipated. Live and learn.
On arrival on Iguassu I was feeling we were on the home stretch. We had been on the move since 5:30 am and as it was now 16:30 we we’re feeling a bit done in. Kingsley had booked a remiss to collect us and take us to the hotel. We stood around and waited until the arrivals hall was empty of passengers except us. No remise.
A friendly taxi driver offered for drive us for less than we had been quoted for the remise, and Kinglsey suspected there had been some mix up with the date he had booked so we jumped in the taxi, where both our bags fit this time and off we went to the park.
There are only two hotels inside the national park. One on the Brazillian side and another on the Argentinian side. We are staying at the Sheraton on the Argentian side making this the decadent honeymoon part of the trip. One of the reasons is that I am very keen to squeeze as much as I can out of the four hours each day between 6am and 10 am when all the bus loads of other tourists arrive.
Our hotel room has an amazing view. You can get a similar view form the patio bar, but as we discovered the seats their are quickly monopolised by the roving packs of octogenarians than seem to be the main residents of the hotel. 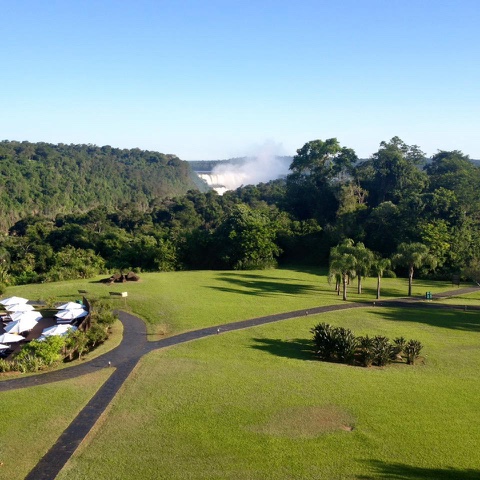 The funny thing is about staying in a more expensive hotel, you seem to get less included. No free wifi in your room here. We signed on to their loyalty program ( I’m expecting spam in my future) which give us wifi in the common areas. Very odd. So I’m blogging from the lobby.
We survived the day without arguing, arrived in the right place, on time, with baggage,  enjoyed a cocktail looking out over greenery to an amazing waterfall. I’m calling it a win.