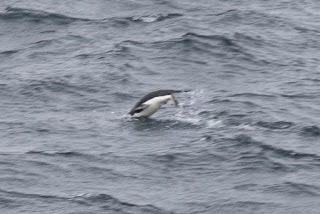 Day 16 – Antarctic convergence and beyond aboard MV Ushuaia

A day of firsts. Today we saw our first penguins swimming in the ocean. We were all very excited, which must amuse the crew no end.  They swim like dolphins, porpoising in and out of the water to maintain their speed.  I don’t know why I was surprised to see them out so far away from land.

We spent some time out on deck trying to get photos, but they are quick and quite little so I certainly didn’t get much.

We also saw our first seals swimming about, out first icebergs and our first whales. We entered Antarctic waters and saw the South Shetland Islands shrouded in fog. It was hoped that the evacuation would happen off King George Island today, but although a plane got very close it was turned back from the island because of poor visibility. The seas are much calmer now we are out of the Drake which was a relief for those suffering from sea sickness. The sea sickness patches came off.

It was a day of lessons and we were given the run down on behaviour in Antarctica including giving penguins the right of way, how to get in and out of zodiacs and boot cleaning to ensure we didn’t introduce pests or disease anywhere. 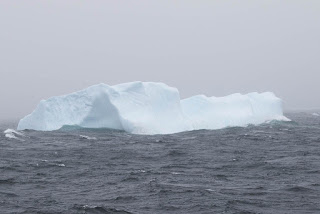 The lecture of the day was about seals and sea lions. I had no idea  they were closely related to bears and otters, although looking closely at sea lions it seems quite obvious to me now with their little sticky outy ears. True seals are better suited to the water, while sea lions are able to walk much like dogs using all four limbs on land. And they can put on some speed when properly motivated, as we were to see in the days to come. Both are deserving of respect and distance on land where they can get quite cranky if you get too close. Duly noted.

The winds were strong (40 knots) so there was no opportunity to make a shore landing safely. That did not mean we lacked for entertainment as Dave and Di put on a show for us in their penguin onsies. Fabian was delighted, and I think he may be stalking Dave and his onsie for the rest of the trip.

The dining room on the Ushuaia is divided into a series of rooms. The
rearmost has tables that seat ten people.  The chairs are attached to
the floor (although there is a secret trick that can be used to
temporarily remove and replace the)  and swivel. There is not a lot of
room between the chairs, and for people like Kingsley who is all legs
getting in an out is like a three dimensional game of Tetris. In the end
he seems to have settled on a technique that has him entering the chair
over the seat back. Not very dignified, but it gets him there.

The
movement of the ship means you become quite intimate with your fellow
dinners as you are often literally rubbing elbows, thighs, shoulders
etc.

We also had our first photography tour session with Alex.  She talked about the use of exposure compensation and birds in flight photography, and distributed out photo challenges for the trip.

Alex also presented us with pictures of our beautiful fur babies and seeing the gorgeous photo of Smudge made me a little* emotional. This is the longest we’ve been away from Smudge and Sausage and being out of contact is very hard. In retrospect it was just as well we were out of contact as this was the day of the storm and Sausage’s first great escape and being able to do absoluelt nothing would have been unbearable.

When attempting to review my photos and makes some notes on the day I discovered that I was finding it difficult to make out some of the settings on my camera.  It unfolded that both Kingsley and  I had run into one of the side effects of the patches, affecting near vision. I’d like to blame that for my sub-par penguin swimming photo, but I don’t think I’d get away with it.